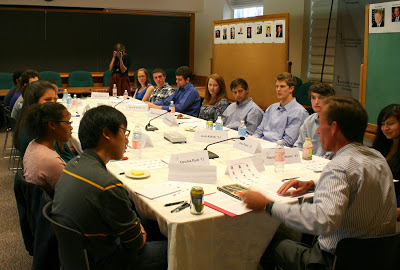 On October 11, 2011, sixteen Dartmouth undergraduates participated in a focus group prior to and immediately following the Republican Presidential Debate at Dartmouth College. The panelists came from all walks of life and were selected in hopes of representing the diversity of the campus.

The group was joined by Professor Ron Shaiko, Senior Fellow and Associate Director for Curricular and Research Programs at the Rockefeller Center, who served as their facilitator for this focus group. The focus group began with a discussion of the students’ first political experiences, agents of political socialization, and political ideology.

The panel then discussed the three presidents whom the students had been most aware of in their lives - Presidents Bill Clinton, George W. Bush, and Barack Obama. Panelists were then asked what kind of characteristics they looked for in a strong president. After this analysis, the panel was asked to discuss how much they knew of each of the GOP presidential candidates, and espouse both positive and negative traits about each of the eight contenders. The session drew to a close for the afternoon and reconvened after the Republican Presidential Debate at Dartmouth College later that evening.

At the debate, the panelists had the opportunity to watch the debate together as members of the stage audience in Spaulding Auditorium and met up afterwards to discuss what they had seen and heard. They were asked whether their general views of each candidate improved, diminished or remained about the same. Following their general assessments, the panelists were also asked to identify the candidates who demonstrated the traits of a strong president which had been compiled earlier in the afternoon. The group was then able to speak with members of the media to discuss their opinions of the debate.