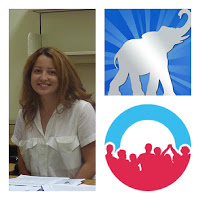 The Rockefeller Center is happy to bring you first-hand coverage from the Republican and Democratic National Conventions this year.  Ester Cross '15 shares observations and reflections for this "Rocky On The Road" blog series.

Read on for Ester's most recent update.

The greatest contrast I have noticed between the Republican National Convention last week in Tampa, FL and the DNC is the level of excitement among the delegates, alternates and guests. The arena of the DNC bursts with cheers, applause, and chants I had not experienced at the RNC.

Despite the excitement and support shown President Obama in the arena, the Obama administration is continually under attack from both the left and the right. Occupy Wall Street protestors, undocumented immigrants as well as Christian evangelical groups have been demonstrating around the convention perimeter since Sunday. Christian groups have been protesting the Democratic Party platform’s support for same-sex marriage and abortion. See photos here.  Other Christians are bringing attention to the cultural changes that drive many Americans away from faith.  I've written more about this for Talk Radio News here.

Thursday night the DNC will feature President Obama’s speech to the American people. Though he was originally scheduled to speak at the Bank of America open stadium, the DNC committee decided to move the speech to a much smaller venue at the Time Warner Cable arena due to forecasted rainstorms.