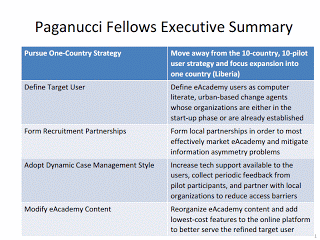 The Project
The Paganucci Fellows social impact consulting project this year was to develop an expansion strategy for the Global Grassroots eAcademy for Social Change, a web-based social innovation platform. The eAcademy is tailored toward early-stage, grassroots social change agents who are interested in starting their own non-governmental or civil society organizations to address social issues in their communities. Global Grassroots has developed a beta version of the eAcademy and is about to wrap up the first round of pilot testing with pilot users in 10 countries which The modules are delivered entirely online.
The eAcademy is modeled after the Global Grassroots Academy for Conscious Social Change that has been operating in Rwanda for the past six years. The Rwanda program is a social impact incubator that provides non-profit management skills, leadership training, personal transformation practices, seed grants and high-engagement support that enables vulnerable women change agents to launch their own grassroots solutions benefiting women and girls. Thus far, Global Grassroots has launched 21 social ventures (with an additional five currently in development) in Rwanda.
Global Grassroots is currently in an expansion phase.  Its initial challenge was to figure out the optimal strategy to make its Conscious Social Change curriculum available to change agents in other countries without having a physical presence in those countries. Based on recommendations from a team of Tuck students, Global Grassroots decided to use the Internet to make the curriculum available to change agents outside Rwanda. Thus, Global Grassroots developed the eAcademy’s beta version and launched a pilot run.
The challenge for the Paganucci Fellows this summer was two-fold:
During the first leg of the fellowship, the fellows spent a week navigating the eAcademy to provide feedback on content and structure. However, in order for the fellows to provide insights on operations and marketing strategies to reduce access barriers, it became essential for them to pursue field research to test and validate their assumptions, and to gain on-the-ground insights from organizations, change agents, and policy makers about best practices.

The fellows chose to conduct research in Liberia for four main reasons:
Travel Problems
The Paganucci Fellows embarked on their research trip to Liberia on Saturday, July 28th, 2012. However, because of logistical problems with United Airlines, only two out of the five fellows made it to Liberia.
Upon arrival at the Logan Airport in Boston, the fellows learned that their flight from Boston to Newark – from where the fellows were supposed to fly to Brussels and then to Monrovia – had been cancelled shortly beforehand due to the forecasts of unfavorable weather conditions around Newark. Yet, as two seats were still available on an earlier flight to Newark, the UA clerk assigned those seats to Piotr Dormus and Mahmud Johnson, and notified Aurelia Solomon, Kelly Tropin and Jeffrey Wilson that he put the three of them on flights from Boston to Amsterdam and from Amsterdam to Brussels, so that they could make their original flight from Brussels to Monrovia.
Shortly afterwards, it turned out that the new flight to Newark was constantly being delayed. Thus, another UA employee rerouted Piotr Dormus through London and Brussels, and Mahmud Johnson through Atlanta and Accra. Eventually, they both made it to Liberia.
Meanwhile, the other three fellows flew to Amsterdam. Upon arrival, they learned that the UA clerk in Boston put them on standby on an already overbooked flight from Amsterdam to Brussels, which he forget to mention in the conversation at Logan Airport. Thus, the three fellows were unable to get on the flight.
The next flight from Europe to Monrovia was an Air France flight from Paris two days later. Instead of ensuring that the three fellows got on that flight, UA requested three seats from Air France but let Air France make the decision 24 hours later. After spending the night in Amsterdam and arriving in Paris on Monday, the fellows learned that Air France denied UA’s request. Because the next flight to Monrovia was on Wednesday, August 1st, yet was also fully booked, the three fellows along with the Paganucci Fellows Project Manager, Courtney Pierson, decided to fly back to the US. Upon arrival, the fellows sent a letter of complaint to UA, demanding compensation for the plane tickets.
On the ground
Three major work streams underpinned the research agenda: benchmarking local organizations for operations and marketing best practices, gaining insights about how to initiate and sustain in-country partnerships, and user case management, i.e. to understand user needs, motivations for using the eAcademy and barriers to access.
Despite the travel disappointment, Piotr and Mahmud hit the ground running in Monrovia, as the fellows had spent the prior three weeks scheduling interviews, and designing surveys, interview guides and questionnaires. The team handled the travel situation exceptionally well. The other three fellows returned from Europe on Tuesday July 31 and were back in the office on Wednesday. They provided support to their colleagues in Monrovia by conducting background research and drafting interview guides for additional meetings the fellows in Monrovia had managed to set up while in Monrovia and creating online surveys to accommodate some changes the fellows in Monrovia had to make to the research itinerary.
While in Liberia, the fellows interviewed youth and NGO leaders, heads of international organizations, high-level government officials, women in rural areas, a representative of a multinational corporation, and students. The fellows also organized a user-testing workshop at an IT hub in Monrovia to gauge Liberian change agents’ feedback on the current version of the eAcademy, to assess what kinds of skills they need to improve their social ventures, and to gain insights from them on potential barriers to access.
The discussions held with Liberian change agents, organizational heads and policy makers were overwhelmingly positive. Policy makers and change agents stressed that there is strong demand for skills training in post-conflict Liberia, as most of the nation’s talents emigrated during the civil war. Government officials revealed that the eAcademy model fills a niche currently unmet in Liberia; most organizations involved in skills training either focus solely on helping Liberians develop entrepreneurship skills or teaching them how to manage NGOs. Additionally, there is a huge segment of the population – particularly among the youth – who are incredibly passionate about leading change in their communities, but lack the skills and resources to start their own social ventures. For these potential change agents, the eAcademy curriculum would be a useful tool in helping them to structure their approach to addressing needs in their communities.
On the operations side, the fellows gain insights from organizations in Liberia about how to most effectively market the product, recruit users, and reduce barriers to access. The fellows realized that to most effectively impact the users Global Grassroots would have to initiate and sustain partnerships with local organizations and government agencies. Thus, they began partnership discussions with local organizations, which were overwhelmingly open to partnering with Global Grassroots on the eAcademy project.

The trip to Liberia added depth and dimensionality to the Paganucci Fellows’ summer research. They discovered that some information found stateside was not as accurate as they had initially perceived, but more importantly, they gave more precise and actionable recommendations to their client and were more comfortable with their advice. They now have a heightened confidence in the ability for the eAcademy to succeed and make a difference in the world.  A slide summarizing their recommendations is included as an addendum.