Law Professor James Fleming to Discuss “The Myth of Strict Scrutiny for Fundamental Rights” on 10/31 at 4:30 PM 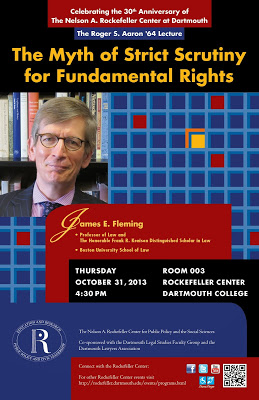 In constitutional law, it is commonplace to say that the Supreme Court applies “strict scrutiny” in protecting fundamental rights under the Due Process Clause – almost automatically invalidating any statute restricting such rights. But James Fleming, Boston University Law Professor and incoming Vice President of Law for the American Society for Political and Legal Philosophy, proposes a new theory, one that shakes the very framework of the U.S. legal system.

Fleming’s lecture, “The Myth of Strict Scrutiny for Fundamental Federal Rights,” will outline this controversy and its effects on the current justice system. He suggests that certain justices are utilizing this misconception to push their own agenda, one that increases difficulty in protecting rights of privacy and autonomy. Fleming argues that opponents of these ideas have yet to realize that they are perpetuates a system of injustice and misconstrued mindsets. The lecture will discuss a new framework: the use of “reasoned judgment” in protecting “ordered liberty.”

After analyzing cases in which this protection came into question, Fleming will uncover truths that shake the very basis of the legal system. This investigation may prove to inspire scholars and rising leaders to address misconceptions that plague the legal system.

Please join us for Professor James Fleming’s talk, “The Myth of Strict Scrutiny for Fundamental Rights” in 003 Rockefeller at 4:30 pm, Thursday October 31, 2013.