We've made it to the weekend in Cape Town! Our day started bright and early with hotel breakfast and an 8:15 am departure for Robben Island. For us students who read Nelson Mandela's A Long Walk to Freedom over the summer in preparation for this class, today was a much anticipated event on our itinerary. Robben Island is the maximum security prison in which Nelson Mandela spent 18 of his 27 years imprisoned and is where the first manuscript for his memoir was written (in secret). The prison complex is now a museum dedicated to preserving history and educating visitors; the island houses permanent residents, such as museum staff and prison guides, making positive use of facilities that served antihumane purposes for so long. After a short and blissfully uneventful ferry ride, we arrived on the island.

Greeted by bright blue waters and a fishy sea smell, many of us were struck by the sheer size of the island. While chiefly known as a prison, Robben Island has served many purposes in its lifetime. As we learned through the bus tour, the island has been used as a refueling station for Dutch colonialists, a colony for people with leprosy, and a precautionary front line of defense during World War II. At the southern tip of the island, we were able to stretch our legs and admire the view of Table Mountain. 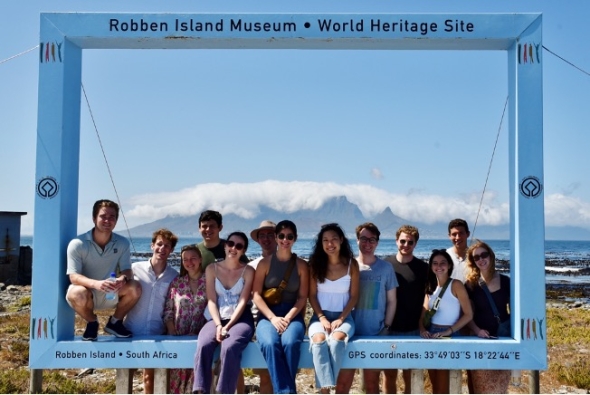 Fun fact from Alistair, our country manager — the layer of clouds that sits atop Table Mountain is called the "Tablecloth." 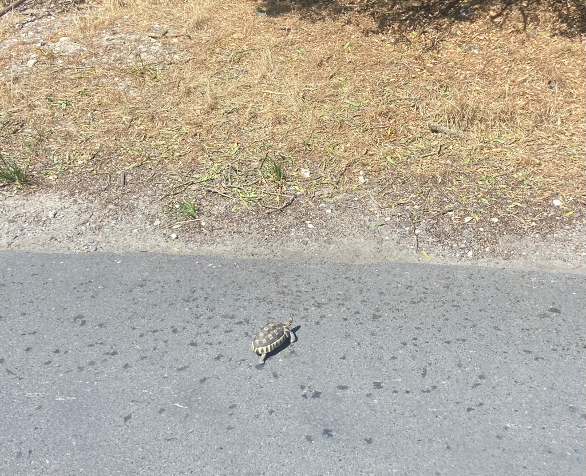 Safari activities may have been reserved for last weekend, but guest appearances from pedestrian animals are always welcome — another reason to tune in tomorrow (hint: think flightless, feathered friends…)

After the bus tour, we were led by a former Robben Island political prisoner, Sipho Msomi, on a tour of the facilities. Msomi was imprisoned at the age of 22 from 1984 to 1988 for his involvement with the ANC and efforts to end the apartheid regime. We saw the bed mats on which prisoners slept, prison uniforms, and the familiar courtyard that Mandela described in his memoir, where he and other prisoners were forced to chisel rock. The tour concluded with a walk-by of Mandela's cell through the corridor that housed many other prominent freedom fighters. In his memoir, Mandela writes that he could walk the length of his cell in three paces; seeing the 7 ft x 9 ft cement cell with our own eyes brought the somber illustration to life.

We promptly made our way back to the dock and onto the boat for a noon departure. The boat, however, had different plans. After a 360° spin in the harbor, we were told that the engine was malfunctioning and that we would need to switch boats **Cue flashbacks to our engine-sputtering van clawing its way back to Johannesburg from our game lodge weekend** It seems that our group just has the magic touch. After an hour of waiting, some of which occurred under the UV index level 9 sun, we boarded the second boat. What fools we were to believe that the hardships of our 7-mile journey back to Cape Town were over… With strong winds and angry waves, the sinusoidal path of our boat sent some of us to the deck for fresh air and others' heads in between their knees. 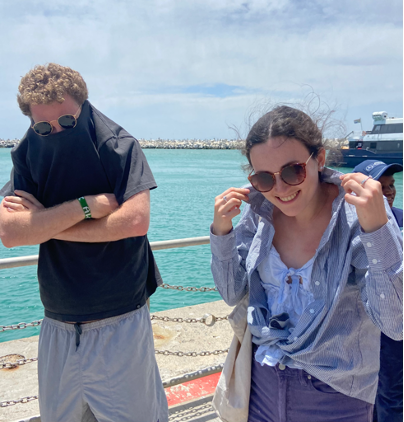 Drew Thompson '22 and Fiona Sleigh '23 adopting creative strategies to protect their sunscreen-less skin during our queue. 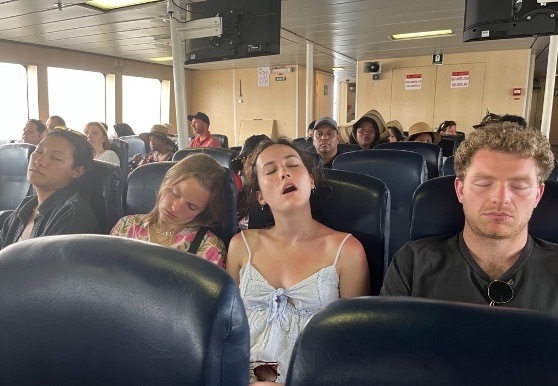 Sophia Swanson '23, Fiona Sleigh '23, Drew Thompson '22, and I (Kate Yuan '23, your correspondent) resorted to losing consciousness in order to get through the rocky ride.

After making it back safely to shore, Alistair generously treated us to lunch. Most of us wisely chose to have thick milkshakes and some form of raw fish to settle our stomachs. After lunch, we headed back to the hotel to work on our memo for the rest of the day (read: nap). Work, of course, did occur today. With only a few days left on this journey, the time pressure is ratcheting up as we prepare for our deadline of "before we board the plane in Johannesburg." Still, we have exciting events ahead of us; tune in tomorrow to hear about our trip to the Cape of Good Hope!