Hello from Cape Town, which has been described as the best or worst part of South Africa, depending on who you ask in Johannesburg!

Your tireless correspondent's coverage of South Africa's policy challenges began no earlier than 12:17 AM this morning, when loadshedding interrupted her work on, appropriately enough, the state capture section of the memo. (Loyal readers will recall from Fiona Sleigh '23's post that Eskom, the state-owned power utility, has implemented scheduled blackouts to manage capacity issues due to grand-scale corruption.)

Several hours later, the group awoke to operational lights, an efficient omelet station, and a high-powered toaster – the final item to the dismay of Professor Wheelan. We headed to the Desmond and Leah Tutu Legacy Foundation, noting the cloud-laden backdrop of Table Mountain as our van navigated the city. However, we soon discovered that the lobby of the Foundation boasts marvels of its own: the beaded Dream for Africa Chair and an airborne Archbishop Tutu. 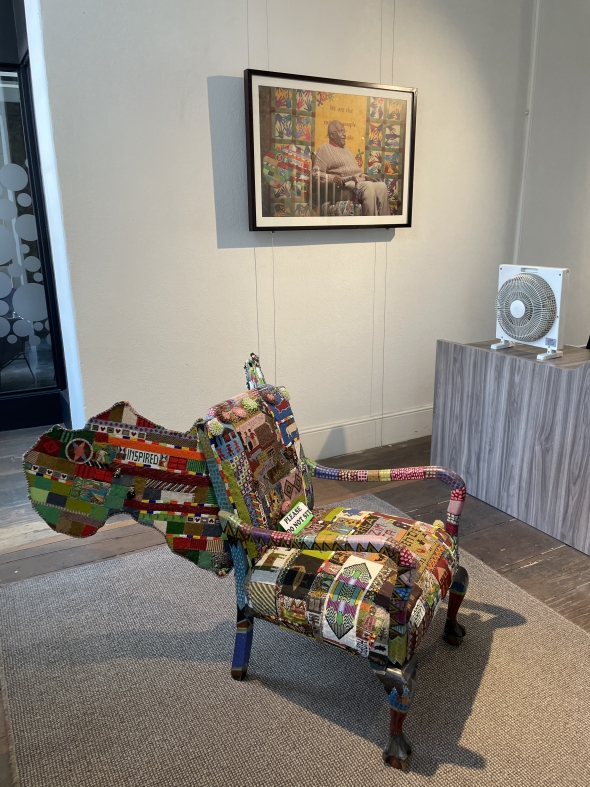 This chair, beaded by the women of Woza Moya, travelled around South Africa and the world to collect dreams and symbolize hope. The nearby photograph shows the Archbishop sitting in the chair.] 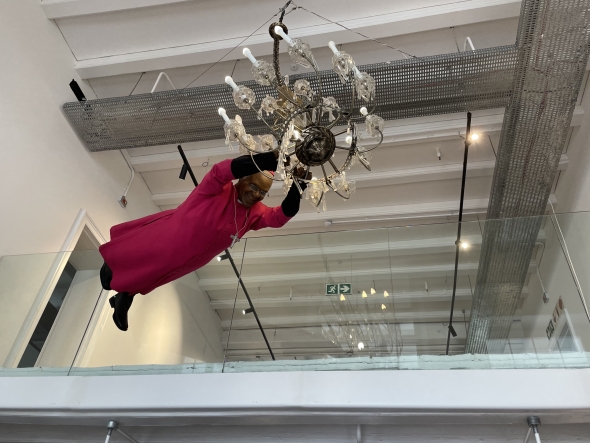 Purple is all the rage in Cape Town.

Our early dose of inspiration only increased with the arrival of Mary Burton, the president of the Black Sash from 1986 to 1990 and a Commissioner of the Truth and Reconciliation Commission (TRC) who served on its Human Rights Committee. Members of the Black Sash, founded in 1955 as a non-violent anti-apartheid organization for liberal white women, donned the symbol to mourn the loss of Constitutional rights and mounted visible white opposition to institutionalized racism.

Burton led us through Truth to Power, the Foundation's flagship exhibit located in the chambers of the Old Granary. Its history as a former women's prison echoed our experience on Constitution Hill. As we traced the advocacy of the Archbishop and his leadership of likeminded clergy against the regime, Burton also directed our attention to Tutu's principled admonishment of the practice of "necklacing" suspected informants. Throughout the tour, our prior reading of Burton's book provided helpful background knowledge on the TRC's structure, proceedings, achievements, and shortcomings. The victim wall and uplifting film at the end symbolized the pain and potential of the ongoing project to forge a Rainbow Nation. Overall, the documentation of the Archbishop's dedication to his country, embrace of progressive social causes, and championship of freedom left a lasting impression. 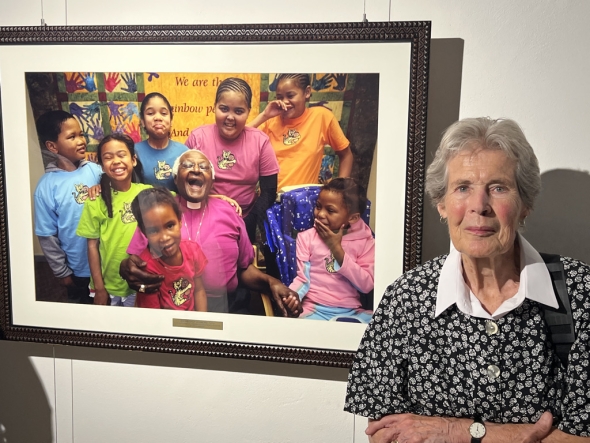 Two reconciliation leaders and the future of South Africa.

We then walked down the block to the District Six Museum, commemorating the vibrant community which once surrounded the building. In 1966, as the precursor to destruction by bulldozers and the forced removals of over 60,000 residents, the apartheid regime declared District Six a white area under the Group Areas Act of 1950. In a similar case to Sophiatown, a razed township located on the outskirts of Johannesburg, the linguistic, religious, socioeconomic, and racial diversity of the district discredited the entire premise of apartheid. 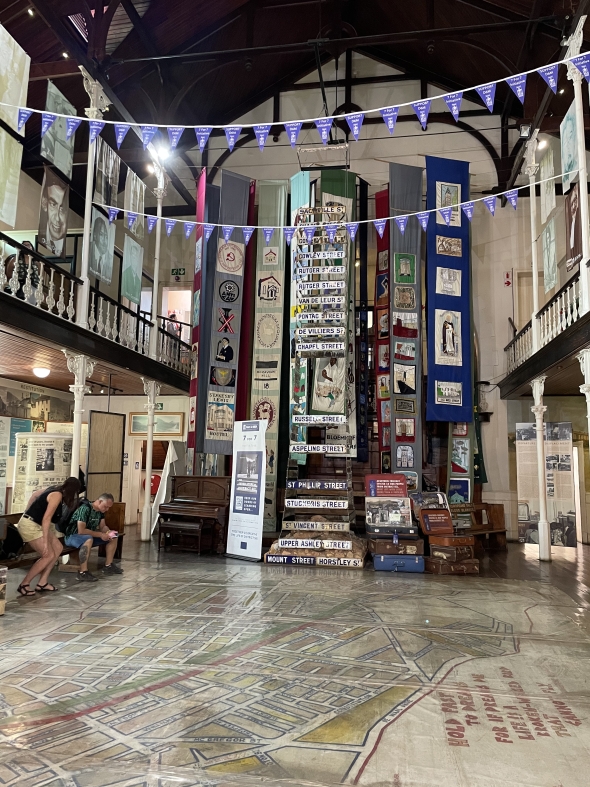 Although our policy chops could not earn us admission to the private event unfolding at the museum's café, we found an excellent alternative at a Moroccan restaurant around the corner to continue our conversation with Burton. Details included her journey from her birthplace of Buenos Aires to Cape Town – it involved a fateful ski trip in Europe – and the remarkable abilities of her fellow Black Sash members to chain themselves to fences. Adelia Rattray '23 ordered an impressive platter of couscous and chicken, while Henry Nolan '23 and Fiona Sleigh '23 took tentative bites of their delicious, but scalding, tagine dishes. 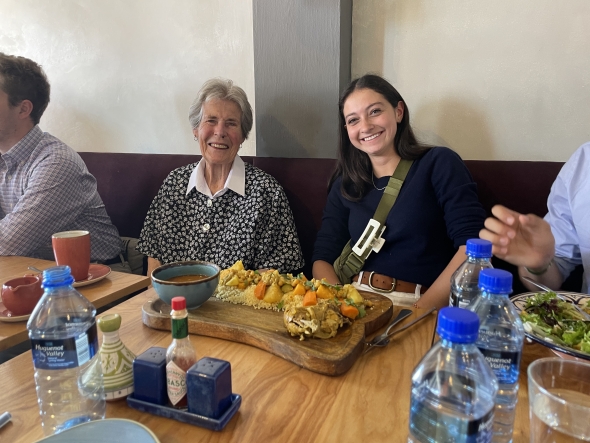 The TRC practitioner and one of our TRC protégés. Adelia Rattray '23 and Josh Freitag '23 (not pictured) seek to address the unfinished work of the Commission in their portion of the memo.

We then assembled in the hotel's masterfully concealed board room, featuring a mirrored door and a knob two feet off the ground, to meet our next guest. A long-standing member of the ANC who has served in capacities including South African Ambassador to the United States, Member of the National Assembly, and Premier of the Western Cape, Ebrahim Rasool impressed us with the cogency of his arguments and exposition of the status of the party. In short, although the ANC has overcome organizational and ideological crises in the past, it has never faced a moral crisis until now. He bluntly advocated for an amputation of the ANC faction led by former president Jacob Zuma. 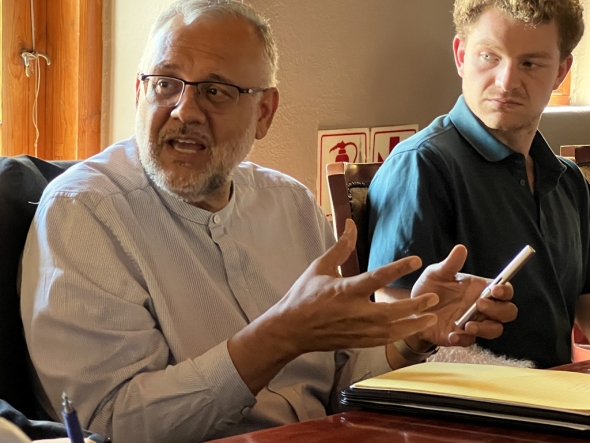 After Jason Norris '24 shepherded us back into the van, we set off for the coast to attend a conference on healing in the Global South hosted by the University of Pretoria and other partners. Our speedy route passed "BABOON X-ING" signs and a shark-spotting outpost to protect surfers. Upon arrival, we enjoyed tea before hearing that load shedding would begin in one hour, leaving just enough time for the film screening. 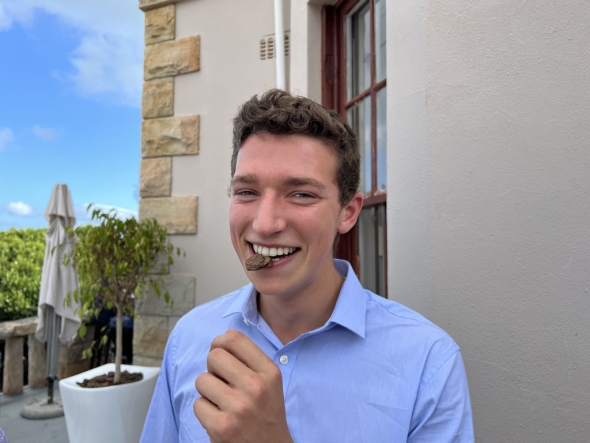 Henry Nolan '23 convinced unassuming Jason Norris '24 (pictured here) to consume a piece of bark by framing it as a brownie. 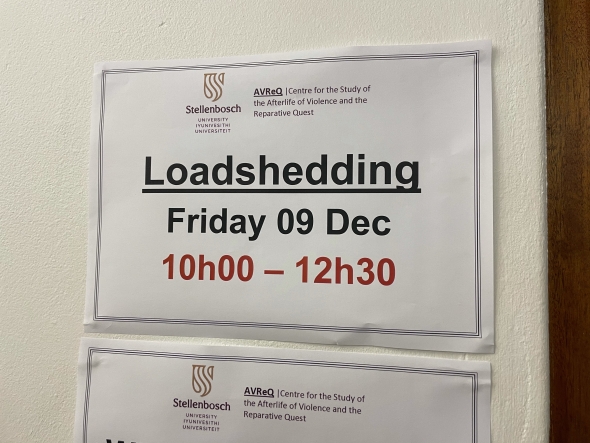 We joined other conference participants to watch We Never Gave Up, the third installment in a series of documentaries made by the Human Rights Media Centre. The film features eleven victims of apartheid and their ongoing struggle to find economic opportunities, access basic services (including trauma-informed healthcare), and obtain closure. Shirley Gunn, the Centre's executive director, joined the ANC and its armed wing as a student and experienced appalling conditions in detainment with her infant son. In addition to calling for archival organization and more monetary reparations – the Mbeki administration disbursed payments that were 1/5th of the TRC's recommended amount, and only to a portion of recognized victims – Gunn supported community- and advocacy-based healing. To the tune of the facility's growling generator, Gunn then marched us to the beach, where she provided additional details about a holistic approach to reparations. 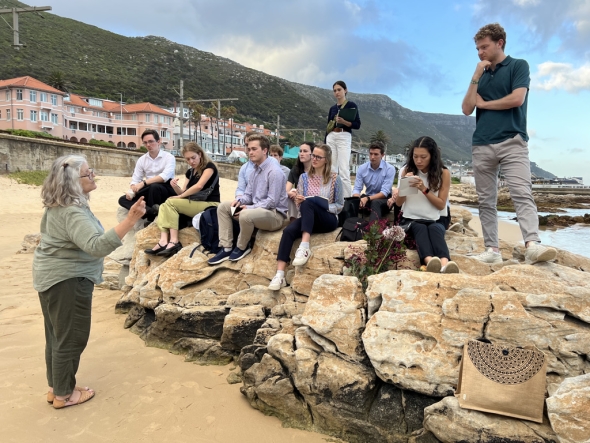 And the granite of the Western Cape in their muscles and their brains! Yes, I researched the geology of Cape Town for this reference.

Our jam-packed day concluded at the Cape to Cuba restaurant, which served up seafood, subs, and a fondness for 1999 Havana, as detailed at great length in the menu. Gunn shared her opinions on the return of exiled and imprisoned ANC members, as well as tales of her military training in Cuba and Angola. For this Cuban-American author, the thought-provoking combination of the day has provided enough energy to persist – in the dark, and then seated in her hotel room's bathroom – through the latest episode of loadshedding to finish this blog post. Stay tuned for tomorrow, when we will visit Robben Island and reflect on other freedom fighters' sacrifices for the struggle.

Earlier posts have noted the vocal prowess of Henry Nolan '23, last spotted recording at Flame Studios in Johannesburg. However, a new talent has appeared on the PBPL 85 scene: Drew Thompson '22. His manager Alistair Reizenberg snapped several portraits, potentially for cover art, at the Tutu Foundation. Early album buzz suggests a title of Drew (by Drew). 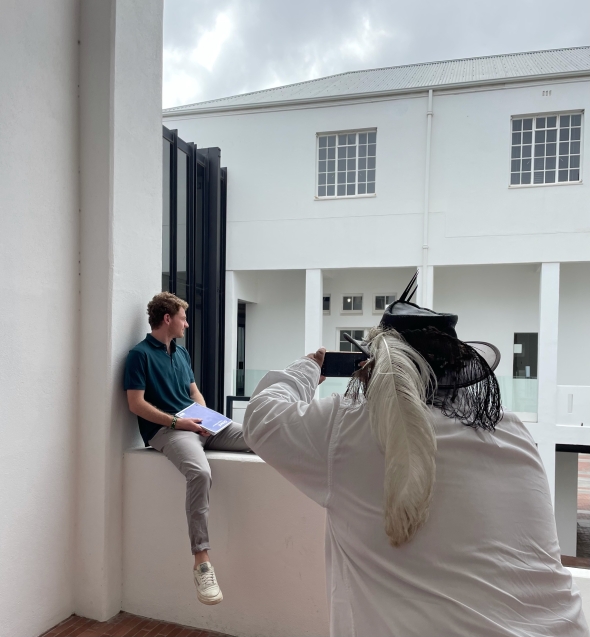