Reproductive Justice and U.S. Law: Where Do We Go From Here?

Experts consider the future of Roe v. Wade and reproductive justice in the U.S., as well as the impact of these rulings on minority women across the country. 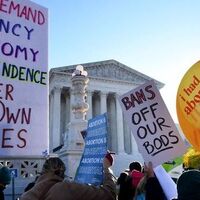 Sponsored by The Rockefeller Center and Dartmouth Women in Law and Politics, with support from Dartmouth Minority Pre-Law Association

Lecture Info:
The issue of abortion rights has become a focal point for the current United States Supreme Court. While the Court’s December 2021 ruling in Whole Woman’s Health v. Jackson allows for some challenges to a Texas abortion law banning most abortions after six weeks, the Court ultimately refused to block the law, writing that lower courts should take up the matter. This year, the Court will issue its ruling in Dobbs v. Jackson Women’s Health Organization, which considers the constitutionality of a Mississippi law that bans abortion after 15 weeks of pregnancy. These recent cases will form the basis of this discussion. Situated in this context, we will consider the future of Roe v. Wade and reproductive justice in the U.S., as well as the impact of these rulings on minority women across the country.

Kimberly Mutcherson is Co-Dean and Professor of Law at Rutgers Law School. A distinguished bioethics and health care scholar, she is the first woman, African American, and LGBTQ law dean at Rutgers. Her work sits at the intersection of bioethics, health law, and family, with a particular focus on assisted reproduction, abortion, disability, and medical decision-making for pregnant women and children. Mutcherson has previously served as a visiting scholar at the University of Pennsylvania Center for Bioethics and a Senior Fellow at the Center for Gender and Sexuality Law at Columbia Law School. In 2021, she received the Association of American Law Schools inaugural Impact Award as a co-founder of the Law Deans Antiracist Clearinghouse Project. She received the Center for Reproductive Rights Innovation in Scholarship Award in 2013, a Chancellor’s Teaching Excellence Award in 2011, and the Women’s Law Caucus Faculty Appreciation Award in 2011 & 2014. Mutcherson is a graduate of the University of Pennsylvania and Columbia Law School.

Mary Ziegler is the Stearns Weaver Miller Professor of Law at Florida State University and the Daniel P.S. Paul Visiting Professor of Constitutional Law at Harvard Law School. One of the world’s leading historians of the abortion debate in the United States, she is the author of three books on social movement struggles around abortion, including the award-winning After Roe: The Lost History of the Abortion Debate (Harvard University Press, 2015) and Abortion and the Law in America: Roe v. Wade to the Present (Cambridge University Press, 2020).  She often contributes to leading media outlets, including the Atlantic, the New York Times, NPR, and PBS Newshour. Her latest book, Dollars for Life: The Anti-Abortion Movement and the Fall of the Republican Establishment, will be published by Yale University Press in the summer of 2022.