The Attica Prison Uprising of 1971 and Why it Matters Today 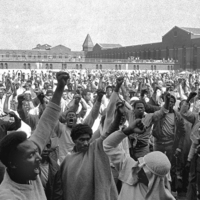 Please note: there will be a screening of "Attica" on Wednesday, February 1 at 6:30 PM in Loew Auditorium. Desirée J. Garcia introduces the film.

Sponsored by the Dean of Faculty, the Departments of African and African American Studies, Film & Media Studies, History, Latin American, Latino, & Caribbean Studies, the Ethics Institute, and The Rockefeller Center.

Dr. Heather Ann Thompson is a native Detroiter and historian on faculty of the University of Michigan in Ann Arbor in the departments of Afro-American and African Studies, History, and the Residential College.

Her recent book, Blood in the Water: The Attica Prison Uprising of 1971 and its Legacy, has been profiled on television and radio programs across the country, it just won the Pulitzer Prize in History, the Bancroft Prize in American History and Diplomacy, The Ridenhour Book Prize, the J. Willard Hurst Prize, and a book prize from the New York City Bar Association. The book was also named a finalist for the National Book Award, as well as a finalist for the Los Angeles Book Prize in History.

Stanley Nelson is the foremost chronicler of the African American experience working in nonfiction film today. His documentary films, many of which have aired on PBS, combine compelling narratives with rich and deeply researched historical detail, shining new light on both familiar and under-explored aspects of the American past. A MacArthur “Genius” Fellow, Nelson was awarded a Peabody for his body of work in 2016. He has received numerous honors over the course of his career, including the 2016 Lifetime Achievement Award from the National Academy of Television Arts Sciences. In 2013, President Barack Obama presented Nelson with the National Medal in the Humanities.

Nelson’s latest documentary Attica, for SHOWTIME Documentary Films, was nominated for Best Documentary Feature at the 94th Academy Awards® and earned him the DGA Award for Outstanding Directorial Achievement in Documentary. In 2021, Nelson also directed the feature film Crack: Cocaine, Corruption & Conspiracy for Netflix, which was a 2022 duPont-Columbia Awards Finalist, and Tulsa Burning: The 1921 Race Massacre, with co-director Marco Williams, for the HISTORY Channel, which was nominated for three Primetime Emmy® Awards.

(Please note that the time of this event has changed.)