The Rockefeller Center is happy to bring you first-hand coverage from the Republican and Democratic National Conventions by Ester Cross '15. 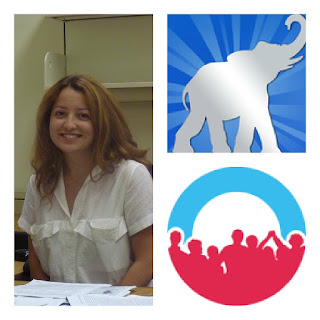 Hello, and welcome to this Rocky on the Road blog series in which I will be discussing the Republican and Democratic National Conventions from the convention floors. I will first cover the Republican National Convention in Tampa, FL from August 27-31. Then, I will travel to Charlotte, NC for the Democratic National Convention hosted from September 4-6. While at the conventions, I will be interning with the Talk Radio News Service, an organization that provides news reports to talk radio programs around the country as well as news coverage on their website and through television reporting.

My interest in the conventions is in covering speakers, demonstrators, committee meetings, contentious factions that affect party unity, and unexpected and important events as they unfold in real time. I will post a preview of each convention prior to its start date followed by my observations and comments on convention events at the end of each convention day. My final post will feature thoughts and perspective on the political conventions, their successes and failures, as well as their significance to the general election.

I would like to share with you a little about myself: My name is Ester Cross and I am a rising sophomore at Dartmouth College. I spent this summer interning with the Congressional Research Service in Washington DC as a Rockefeller Center First-Year Fellow. I am also currently a research assistant working with a Dartmouth professor on his research on political corruption.

I am excited to be in Tampa, FL preparing to attend the Republican National Convention and embarking on my internship. This is a tremendous opportunity and I am happy to be sharing my experiences with you about this salient political process.

My next post will appear Monday morning. I'll also be sharing photos from my experience on the Rockefeller Center Facebook page.  The first batch includes photos from Tampa Bay Times Forum, where final preparations are underway for the #GOP2012 Convention.


More posts from this blog series can be found here.