Voxmasters Recap: A Call to Action 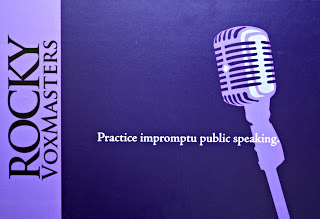 This week, the theme of VoxMasters was “A Call to Action,” and Sarah and Shoshana prepared students to deliver their own call to action by showing them a recording of Barack Obama’s Keynote Address at the 2004 Democratic National Convention. Students were then separated into two groups, one led by Sarah and the other by Shoshana, where they practiced their speaking skills.

These are their stories.
***
Rocky VoxMasters was a very enjoyable and engaging experience. One quote that stuck with me, and clarifies what a call to action is, was “A call to action both motivates people to do something and also relates to them at the same time.” This was very important to learn because it explains that the makings of a good speech is its relatability to the audience.

First, we watched a video of Barack Obama’s 2004 speech at the Democratic National Convention. Sarah and Shoshana broke down Obama’s speech in order to show us how we first talk about a personal story, then relate to our audience and end with the call to action. Afterwards, we were separated into groups and were required to come up with our own 2-3 minute call to action.

Everyone in my group did really well with their speeches. Overall, this was a valuable session because of it’s relevance to us as Dartmouth students since we are constantly told how we are the leaders of the future. An important aspect of leadership is to persuade people to follow us, because without followers a leader cannot hope to create a brighter tomorrow.

--Written by Latrell Williams ’16, MLDP Fall 2013 Participant
***
"The call to action should be specific enough for audience members to know exactly what they can do after hearing your speech," Sarah said. Opening the call to action with a personal story can be an effective way of personalizing the issue and highlighting its significance to listeners.

After students separated into two different groups, they prepared their individual calls to action and then presented them to their group. Each call to action was different and covered a wide range of topics. One student who works at the Class of 1953 Commons described the enormous food waste he encounters every day and urged audience members to reduce food waste. Another student called upon others to support education for women and girls around the world, especially in countries where education has traditionally been denied to them.

Personally, I was inspired by the passion of my Dartmouth peers. Their drive to positively change the world around them inspires me to also make a commitment to improving my community.

***
Despite seeing many blitzes about the Rockefeller Center’s Wednesday night VoxMasters meetings, I had never bothered going until this past week. What changed this week? I guess I was getting sick of dining hall food and wanted a change in scenery; plus free food—so why not?

I wasn’t quite sure what to expect except for the fact that I was going to learn about public speaking. We learned about the main components of a call to action, which Shoshana described as a personal story that can connect with the audience before delivering the call to action itself.

I have to admit, I was a little intimidated when they told us that we all had to give a speech. We were given twenty minutes to prepare a speech. Although the total group had around twenty people, we split off into two smaller intimate settings where we were given specific feedback on a 2-3 minute speech that we gave.

It took me awhile to figure out what to give a speech about, so I decided to hold back on my speech. It was great hearing other students give topics ranging from why we needed to build a lift from the River to the middle of the Green to the necessity of having eight hours of sleep a night to even remembering trafficking victims. At the end of the day, I gave my speech about the “I’m too busy” syndrome that Dartmouth suffers from. The combination of the small group and casual, relaxed nature of VoxMasters really eased me and made giving the speech feel less like a tedious chore but me actually wanting to tell these strangers (who felt like friends) about the “I’m too busy” syndrome.

All in all, going to VoxMasters was an extremely enjoyable first experience. I really wish I had gone during my freshman year to not just get free meals, but to join a supportive community that would help me build my public speaking skills.