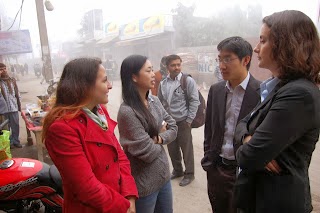 To read the entire PBPL 85 report regarding economic reform in India on SlideShare, please click here.

The students in Public Policy 85, the inaugural Practicum in Global Policy Leadership, have delivered their final report with prescriptions for economic reform in India. The memo lays out a series of highly detailed recommendations ranging from introducing a national Goods and Services Tax (GST) to making significant new investments in education and infrastructure. The memo was written collaboratively by the 12 students participating in the course as a hypothetical “white paper” that could serve as an economic blueprint for the next Indian government. (There will be national elections in 2014.)

Most important, the memo helped to synthesize the lessons learned from 10 weeks of study on campus and nearly three weeks of travel in India. As the Executive Summary explains, “We analyzed works on India’s economics, politics, culture, and history, met with individuals from the CEO of the Bombay Stock Exchange to teachers and principals, and travelled from Mumbai’s towering financial sector to its slums, from the rural village of Kasar Malai to the factories of Noida.”

The participating students encountered a nation of staggering potential, but also a place in which good things often happen despite the government, not because of it. Some of the economic optimism of the last decade has waned, in many developing countries but particularly in India. Good public policy will be essential in the coming years if India is to broaden prosperity, alleviate poverty, and reach its full potential as the world’s largest, most vibrant democracy.

As the memo describes, “The tidal wave of growth carrying India for the past decades following the 1991 reforms has proven to be just that – a wave that is now subsiding, leaving the world’s largest democracy stranded on a barren beach. Time is cheap, poverty is plentiful, and growth has taken leave as the GDP annual growth rate plunged from 10.1 percent in 2010 to just above four percent in 2012. From a fiscal deficit growing alarmingly fast to a population growing even faster, India faces both problems and potential that, if addressed in time, can lead to a new and greater time of growth.”

For one student's reflections on this unique experiential learning opportunity, click here.