MLDP: Writing in the Workplace with Professor Sara Chaney 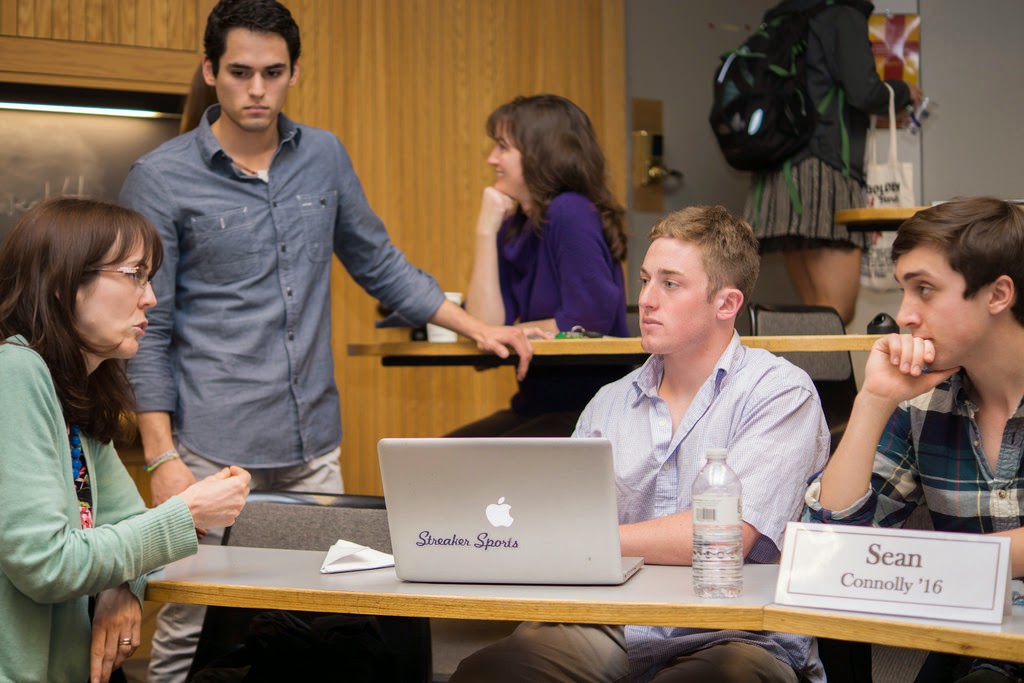 As a college student, learning how to communicate professionally is extremely useful, whether I want to establish a good relationship with a professor or excel at an internship. This week, Professor Sara Biggs Chaney of the Institute for Writing and Rhetoric challenged us to consider how we come across when we communicate in a professional setting. Professor Chaney emphasized approaching this issue from a rhetorical perspective, which particularly focuses on the audience, and the rest of the session showed us how important it is to keep your audience in mind as you write.

We started with a game called “The Medium Is Right!” where we were given a scenario in which we would have to communicate with someone at work. We then determined whether we would use e-mail, a phone call or face-to-face interaction in order to do so. I found this particularly helpful because I know that when I want to express something to a boss or someone I’m trying to persuade in a certain direction, I want to handle the matter as politely and professionally as possible. The ultimate consensus was that the medium of communication can vary based on factors like your relationship with the person you’re contacting and the urgency or controversy of the issue.

“I thought [Professor Chaney’s] focus on audience was really useful,” Meg Parson ’16 said, adding that she appreciated this activity since she wasn’t sure what medium she would have used in each situation.

After playing this game, we were all ready to apply our own critical thinking skills to analyze how a case of communication could go wrong. Professor Chaney introduced us to what she called the “The E-mail Train Wreck,” where “Jennifer” was the president of an organization at Rutgers who wanted to work with an important figure in her field of interest. Unfortunately, “Jennifer” sent an e-mail to this person with no response, so we broke down different parts of her communications with this person to figure out where she could have improved. The important takeaway from this activity was that audience should always shape communication, and the phrasing of what you are trying to achieve through an interaction with someone is very significant.

The final piece of the session took this emphasis on the audience further as we split up into smaller groups to come up with audience profiles for two different cases. According to Professor Chaney, the profile of an audience should contain educational and professional background - knowledge of, authority over and investment in the given topic, and likely reading practices and expectations of your audience. My group was very engaged in our task as we worked on creating an audience profile for our case, which involved writing a blog post for the real non-profit organization Falling Whistles. Falling Whistles works to promote peace in the Democratic Republic of the Congo, and we attempted to narrow down who would be interested in reading their blog and how to cater to that audience.

Professor Chaney’s prizes of Easter-themed candy throughout the session kept us drawn in, but it was truly her strong advice for us as students wanting to know how to communicate professionally that made the session a successful one. She acknowledged the challenges regarding attempting to teach this subject in a classroom and the fact that it is difficult to apply one set of rules to situations in the many different workplaces each of us will enter in our lives. However, the significance of audience awareness is close to being universally true. What I truly valued about this session was that this advice can be taken beyond the workplace and applied with any sort of interaction in the real world. I want the way I express myself to others to come across well, and if I need to communicate with my superiors at a job or internship, I know I have the tools to do so.