T'was the night before our deadline, when all through the hotel

Not a student was working, not even bidding farewell

For the memo had been written, and crafted with care

With hopes that Prof. Wheelan would nay be unfair.

Alas It had been a long and tiring journey,

Yet still a success for sure, with no pupil departing on a gurney.

Experts were consulted and the cynicism came and went,

But we depart with nothing but hope, for this beautiful continent.

Exotic animals abound, the landscape is wild and rugged,

But what captivated you most, was Josh's luggage.

And while we set out to study South Africa's racial reconciliation,

Most of what we found was a nation deep in conversation.

The value of mixing and hearing others out we found

Mattered far more than our grades, which can always rebound.

We can rest assured though, that Wheelan knows he asks the impossible,

What matters now is thanking the parents and Rocky, for making all this possible!

After some much-needed rest, the group got a start bright and early on Monday morning, rolling out of our collective beds bleary-eyed and disoriented at roughly 11:00am. Memo fever had by now gripped most of us and steam was starting to pour from our ears as we had crossed that critical threshold, all too familiar for any student, where the approaching deadline suddenly feels right on top of you, having just moments ago emerged unseen from the void.

The view of Table Mountain from the waterfront market 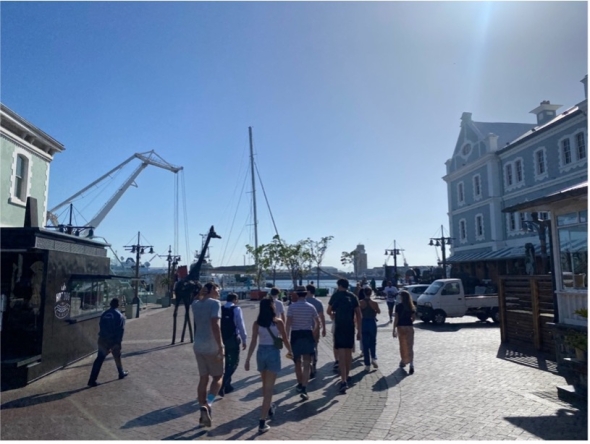 The group on our way to lunch.

With lunchtime around the corner, the group took the short walk down the hotel steps and across the street into the waterfront market that has becoming a rallying point for Cape Town's young professionals and tourists. Students wandered around a food court resembling an immature yet ambitious younger brother to Chelsea Market in Greenwich Village, selecting from familiar nourishment options like poke bowls, avocado toast, fruit smoothies, and the ubiquitous pepperoni pizza. Despite initial high hopes for the market, food reviews came back mixed, with one Fiona Sleigh declaring boldly "eh, it was okay."

With smoothies and lattes in hand, the class migrated from the food market across the square into a shopping center with stalls for local creators on the first floor and a shared workspace on the second. Everything Adam Neuman wanted to be and more, the entire complex might have been transplanted straight from San Francisco one night while everybody was asleep, and there are likely still a few dispirited software engineers trapped in an endless Uber ride to nowhere, resigned to circling around the block one more time for eternity.

Katie Huston discusses the state of education in South Africa

In a conference room on the third floor was where we met education NGO activist Katie Huston, an expatriate from Michigan who has lived in Cape Town for a number of years. The conversation was productive, and she offered unique insights into barriers that early-age teachers in South Africa face.

Plans for an afternoon trip to the top of Table Mountain via gondola unfortunately had to be aborted due to high winds and driving rain, but the group huddled close together in the hotel elevator and observed pictures of the view from the top on a computer to recreate the experience. Henry Nolan from Arkansas appreciated the exercise but thought that "it would have been bigger." 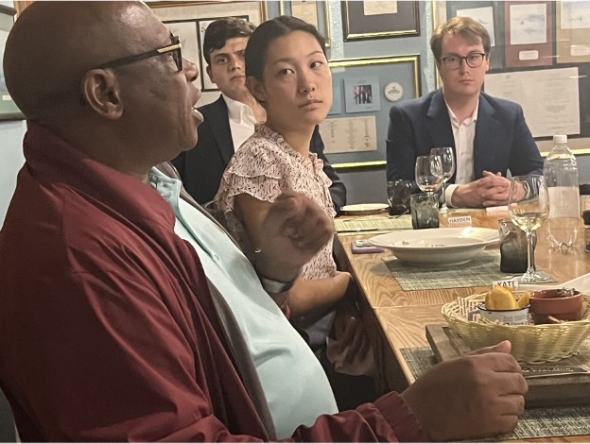 Following several more hours of handwringing, hemming and hawing over the memo, everybody reconvened for a 7 o'clock dinner with the first director of South Africa's Public Prosecution's Office Bulelani Ngucka. Well-known among the class for his decision to refrain from prosecuting now-disgraced former president Jacob Zuma, as well as his reluctance to follow up on cases submitted to his office by the Truth and Reconciliation Commission, the group certainly had a number of questions. Mr. Ngucka was lovely, amenable to answering all varieties of questions, and recounted many stories, such as the time he received a verbal thrashing from Nelson Mandela himself.

Following dinner, celebrations and desperate editing mixed awkwardly into the wee hours of the morning as we absorbed the final full day of our trip. The mood is light, and people are content to head home; perhaps the sign of a successful adventure.