The Final Countdown: The US Embassy, Goodbyes, and Cape Town

After a whirlwind first few days in country and enduring a jammed-packed itinerary during our stay at the DaVinci Hotel and Suites, the group enjoyed a well-earned break from back-to-back meetings and meals last night in Pretoria. Notably, my roommate Thomas even managed to get to bed before 11pm for the first time in months, and I slept for over 11 hours, finally beating the jetlag for good.

It is crazy to think that there are only six days left until we depart. So far, we have embarked on two game drives, toured some of the major sites in the Rainbow Nation, and met with a forward-thinking billionaire, apartheid-era politicians, and award-winning journalists. All that being said, we also have plenty to experience and accomplish before saying goodbye. 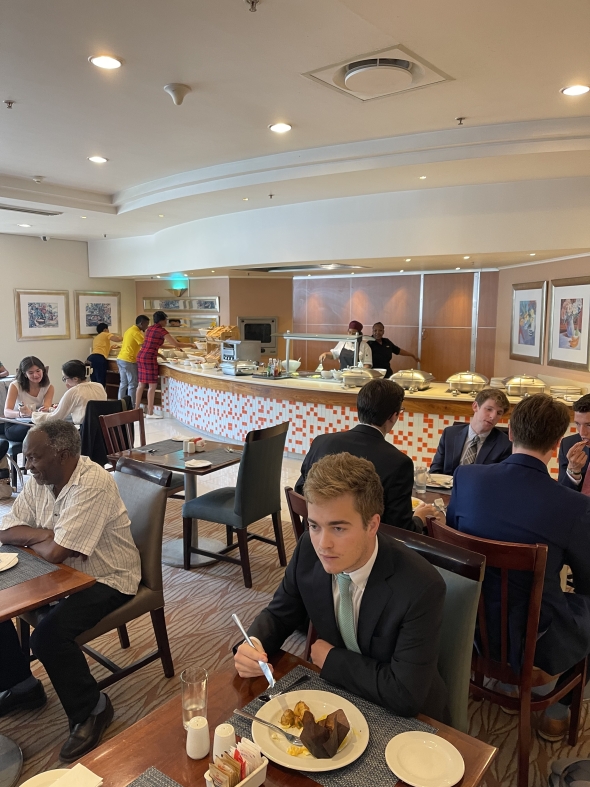 This morning, PBPL85 woke up to a familiar sight in a hotel-made breakfast buffet. After enjoying some sleeping in, we checked out and filed into our 16-passenger mini-van by a lazy 9:20am. Our first and only stop of this travel day was the United States Embassy in Arcadia, Pretoria, where we met with Deputy Economic Counselor Duncan Walker and Political Officer Amy Kornbluth. 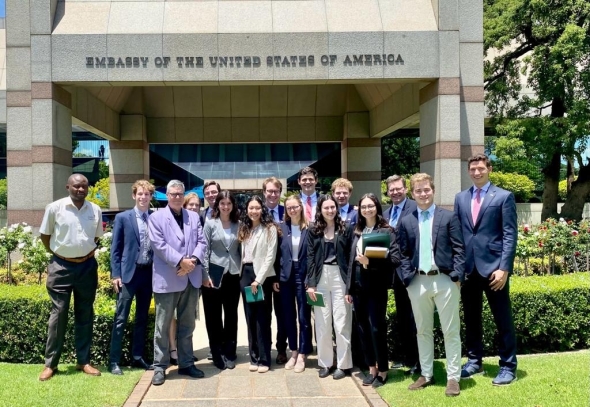 The PBPL85 group poses for a photo with Mr. Walker on the edge of the embassy compound after the discussion.

Proceeding through nearly half a dozen security checks, we managed to remember our passports, leave our electronics behind, and enter the compound---a kind of home away from home (except perhaps for the group's resident Canadian, Sam). Donning gifted lapel pins from the Embassy intertwining the two countries' flags, we met with the pair of officials outside for introductions and an hour-long question and answer session.

The Embassy conference rooms were all booked up, so we were left to enjoy the sun, company, and conversation. Topics ranged from the foriegn service officers' past experiences, the role and function of the South African embassy, and our group's pointed questions about specific policies and conditions to help round out our memo.

After a brief photo op, we returned our temporary security badges and retrieved our passports, electronics, and belongings to board our beloved mini-van for one final time (although, canonically, for our loyal readers, I'm pretty sure this was our second, replaced bus after the first broke down on the hills of Sandton). 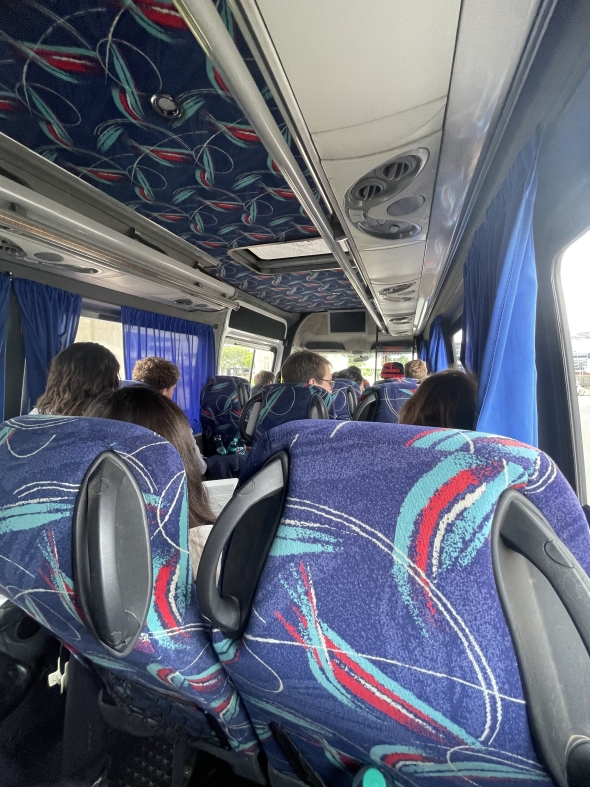 A photo of our Johannesburg bus from the right back corner during our final storied trip to the airport.

Next, we departed the neighboring Pretoria area, and an hour later, our incredibly kind and reliably unflappable (even in the face of several "funny" smells from the engine) driver Gideon pulled us back into the familiar Terminal A of the Johannesburg airport. We pulled our luggage from the little caravan we had been dragging around for a few days and said an emotional goodbye to a favorite with another Dartmouth-themed gift. 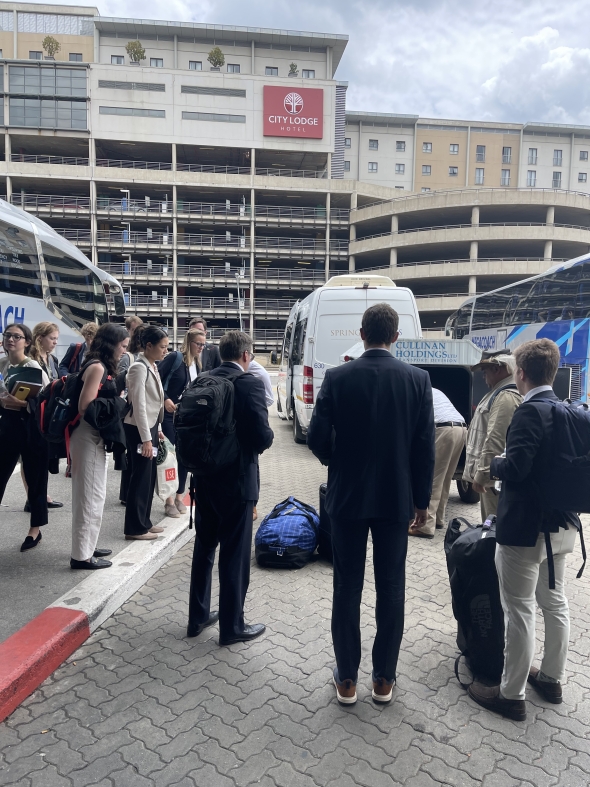 The group unloads their luggage to fly to Cape Town for the final leg of the program. 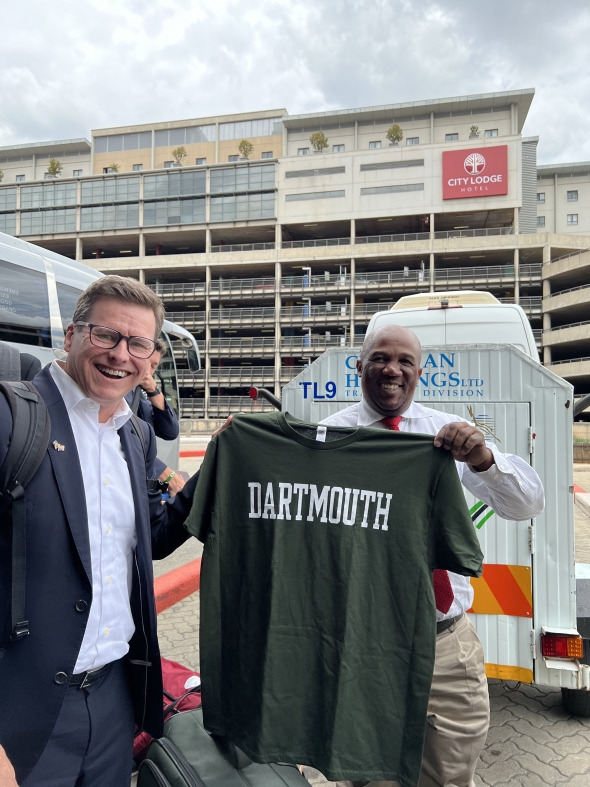 Professor Wheelan and Gideon (right) pose for a photo to commemorate the bittersweet goodbye.

Once at the airport, it was lunch time. Half of the group went to the reliable Nando's, a crowd favorite after meeting with their co-founder Robbie and experiencing the chain in Nelson Mandela Square. The other half, myself included, tried the Airport Craft Brewery (est. 2014), which brewed six different styles of beer ~locally~ (which, as it seems from the massive steel barrels and piping equipment viewable through a glass display, means ~in~ the airport?) and offered a fair selection of "flavored water," or spirits.

No time for that, however, as we got straight to work on the memo for our 5:05pm three-hour flight to Cape Town, the final destination of the trip. 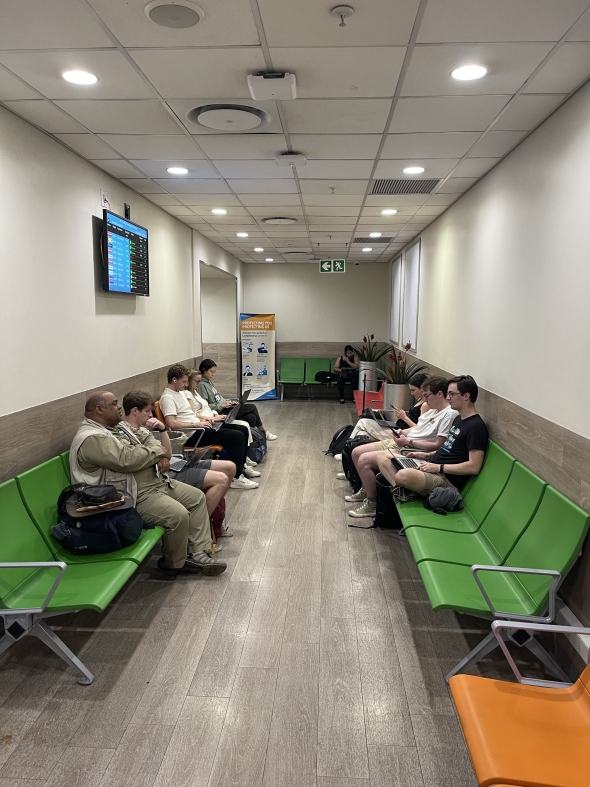 Half of PBPL85---who ate at the brewery---remain hard at work on the final memo immediately after eating.

A slightly bumpy but uneventful flight followed, and Drew, Sophia, and I even got to enjoy the front row and lots of extra legroom after the check-in lady offered to upgrade us. Thomas, Kate, and Fiona also felt inspired to document their trip. 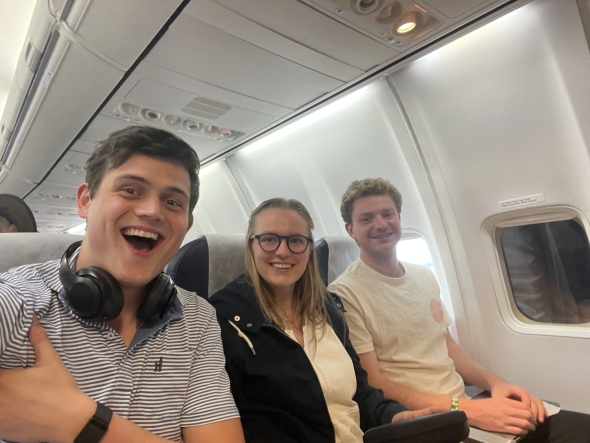 Drew, Sophia, and Hayden (right to left) pose for a selfie before takeoff. 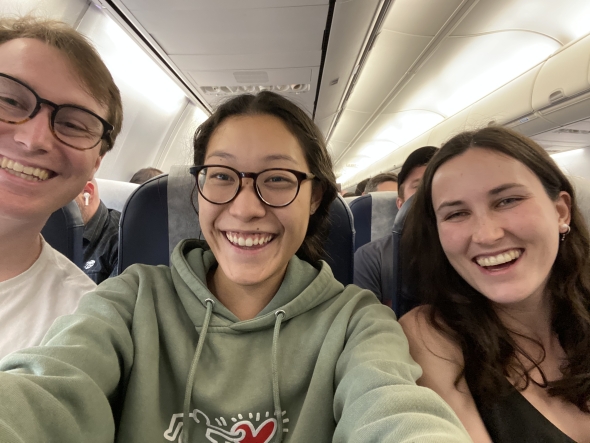 Fiona, Kate, and Thomas (right to left) pose for another selfie after the first but before takeoff.

That being said, there was some turbulence on the trip. While thankfully none of the check-in luggage was lost (*traumatic flashbacks to the Josh luggage saga*), a Safair flight attendant had instructed Fiona and I to check our carry-on luggage while boarding. We didn't understand that we had to pick up the luggage ~before~ baggage claim in the deplaning tunnel.

When our guide Alistair realized our mistake, we ran furiously, backtracking to find our bags. If only we had vlog instead of blog materials to share with you all. Ultimately though, this time everyone recovered their stuff successfully. Next, we drove to our third Legacy Properties hotel, checking in and heading out to dinner as a group, 13 strong. Ending up at a scenic restaurant on the water, food and drinks were shared to end the long travel day before returning to the hotel to work and rest for a big action-filled time tomorrow. 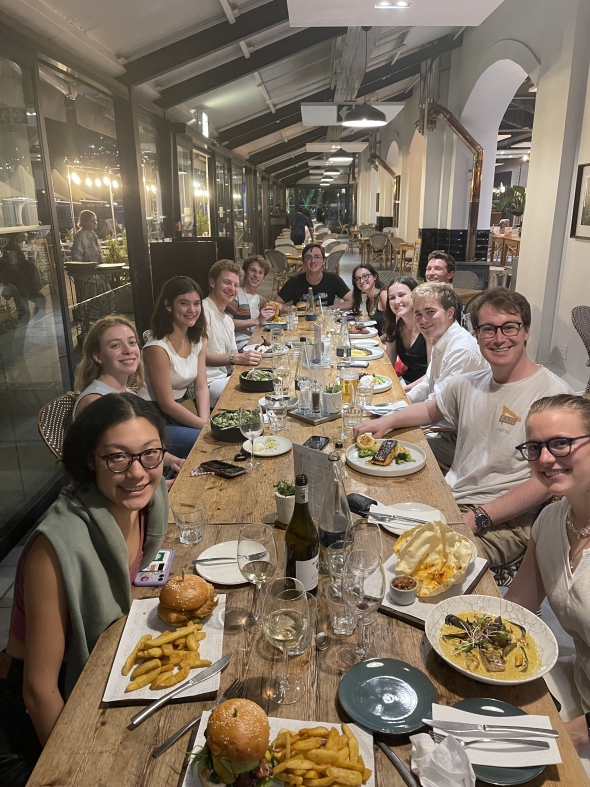 The group winds down after a long day of travel at dinner to prepare for an action-packed Friday.