Pretoria Day I: Roelf Meyer and the Department of Planning, Monitoring, and Evaluation

Today marked one week until the group returns back to the United States, and with it came a change in scenery. At 7:00am, we loaded up our luggage, grabbed a quick breakfast in the hotel restaurant, and departed the Davinci hotel for the final time. We were heading to Pretoria – one of the country's three capitals and where the executive branch of the government is located.

Our first meeting of the day was one we all had been looking forward to ever since the start of the trip. We planned to meet with Roelf Meyer, Ivor Jenkins, and Fanie du Toit at the Boutique Lodge Boardroom in the Silver Lakes Estates. Each of these three Afrikans men have impressive as well as provocative resumes. Meyer is a former National Party politician during the Apartheid era and one of the leaders of the peace talks between the National Party and the African National Conference, Jenkins acted as the intermediary between Nelson Mandela and National Party leaders during negotiations and has since contributed to the transitional process in Northern Ireland and Sri Lanka, and du Toit was the executive director of the Institute for Justice and Reconciliation.

Following the hour drive from Johannesburg to Silver Lakes, our bus was turned away at the gate to the Silver Lakes community. Often in South Africa, many homes and communities are gated off from the public and protected by high walls and armed guards. However, with classic American confidence and the pressure of making it to our 9:30am meeting on time, Professor Wheelan and I – being the student coordinator – were not swayed by the massive pistol strapped to the guard's chest and convinced him to let the bus through. 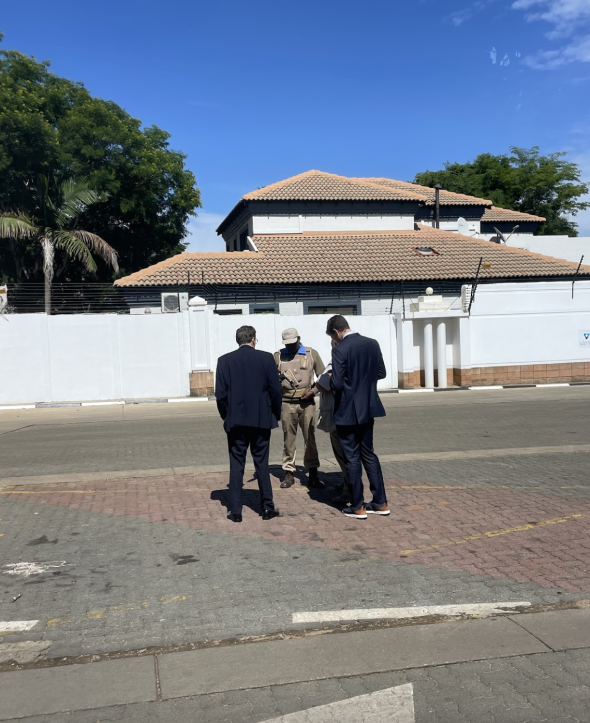 Professor Wheelan (on the left) is explaining why we are there while I (on the right) frantically search for the email from our contact.

Of course, it wasn't until we got outside of the bus that we saw why we were being given such a hard time, as our trailer was literally overflowing with all of the luggage. 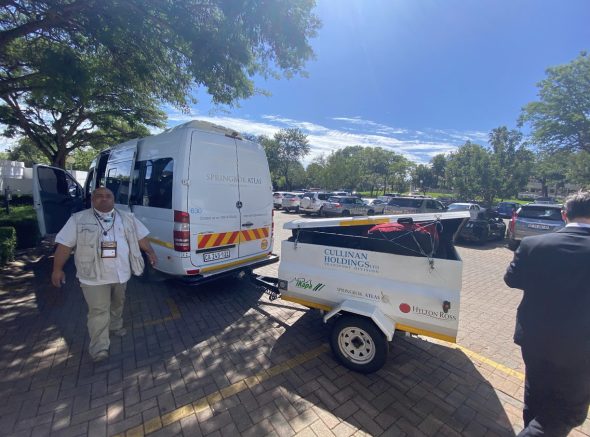 Pictured is Alister, our country manager, who managed to fit all of our luggage into the small trailer being hauled by our 16-passenger van.

Passing through the other side of the gate, it was like we had entered a different country. Each of the homes were massive, three story houses with floor to ceiling windows. In fact, many of these homes within the gated communities had additional gates to their doors and driveways. Furthermore, the difference in racial composure of the area was very clearly predominantly white – despite South Africa as a whole being roughly 90 percent non-white. As we parked outside of a large country club, our country manager, Alistair Reizenberg, quietly said, "can you believe this is in South Africa?"

Despite the hold up at the gate and being given the wrong building number (sorry to whoever's doorbell we rang multiple times), we finally arrived to meet Meyer, Jenkins, and du Toit. The irony was clear that we were meeting about reconciling racial disparities caused by Apartheid with a former-advocate for Apartheid in a community with clear undertones from the Apartheid era. However, the three Afrikaners – who have all done tremendous work since 1990 to reconcile Apartheid – gave us an incredible conversation as well as significant insights which the group will use in the memo. 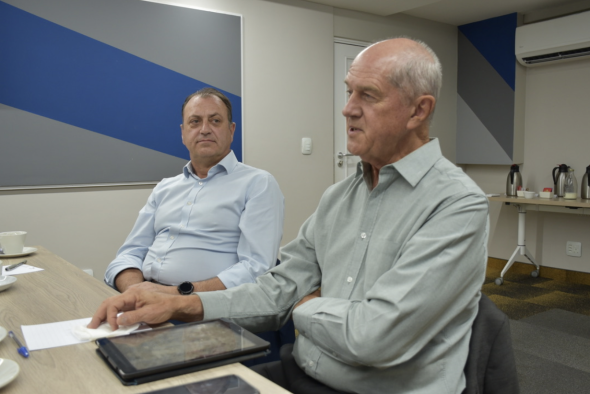 On the right, Roelf Meyer elaborates on his experience during the negotiations to end Apartheid. Pictured on the left is Fanie du Toit.

Afterwards, the group grabbed a quick bite at Café41 right next to the Silver Lakes Golf Course, which consisted of beautifully mowed grass, dozens of palm trees, and a massive fountain despite the country's water shortage. It was a surreal setting compared to what we had experienced so far in the country. 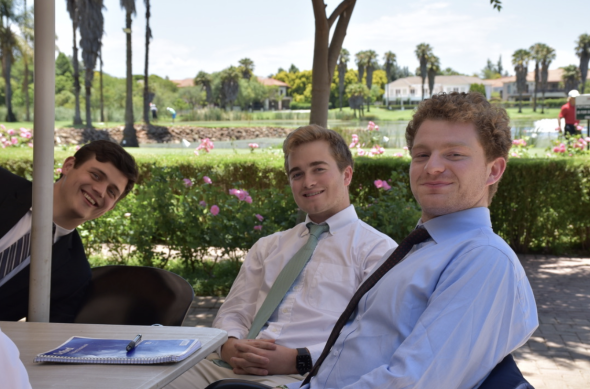 Hayden, Drew, and Henry patiently await their lunch as they enjoy the beautiful scenes of the Silver Lake Golf Course. They are convinced that the man in the red shirt in the background is a professional golfer.

Following lunch, we packed back into the van and headed to our next meeting of the day at the Department of Monitoring, Planning, and Evaluation in the center of Pretoria. We spoke with Stellah Masombuka, Josephilda Nhlapo-Hlope, and others regarding what our two countries can learn from each other. We covered a wide range of policy topics, from social cohesion to grain silos. The folks from the DPME sent us home with a document detailing evaluation of past policies, as well as a South African pocket constitution. 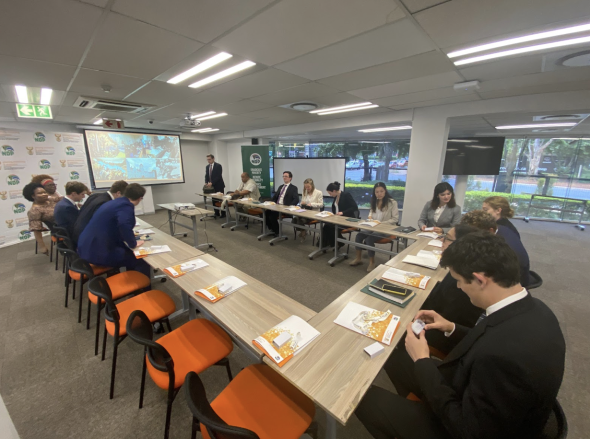 The meeting with the DPME began with introductions and background on racial issues in South Africa and the United States.

After a long day of meetings and travel, we finally arrived at our hotel – the Garden Court Hatfield in Pretoria. Drew Thompson '22 and I put our bags in our rooms and promptly embarked on our daily run. After running in hilly Johannesburg for a week, we were relieved to find that Pretoria was relatively flat and ventured on over to the University of Pretoria's athletic complex. It was a beautiful university, with great fields to run around and incredible dirt paths – it was very relieving on our shins after lots of hard surface running in Johannesburg. 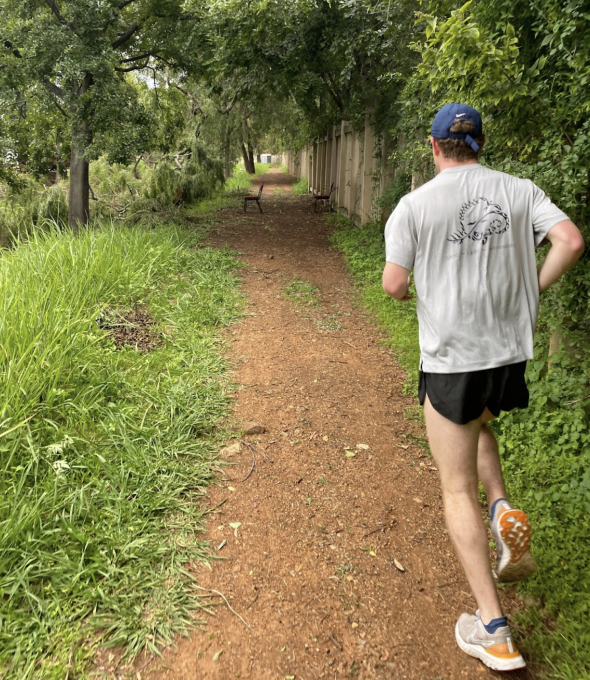 Drew and I discovered this beautiful running trail on the University of Pretoria's campus. We are still not sure what those chairs are doing in the middle of the trail…

After finishing our run, Drew got to work on writing the memo with the rest of the group and I worked on this blog post. We took a brief intermission from working with some pizza delivery organized by memo editor Kyle Mullins '22 and decompressed from a busy day. Our stay in Pretoria will be short, as tomorrow we are visiting the US Embassy at 9:30am and then spending the rest of the day traveling to Cape Town.